Since joining the Rebel Legion in March 2017 I have kept fairly detailed progress threads on the RLUK forums for each costume. All of which were lost when the forum crashed over Christmas. As a result, I have decided to expand and include a record of my methodology here on PoetryInCostume. I intended this site to sit somewhere between a serious academic and casual blog examining the nuance, narrative and semiotics of costume, but after much back and forth I’ve decided to expand and bring cosplay into the fold. I am one, multi-faceted person who lives and breathes costume in every aspect of my life. I should share each of those side by side as the complement and inform each other.

These won’t be progress threads as such – they’ll be done after the fact – nor will they be tutorials. They will be a reflective record of my own that I hope will be helpful or interesting.

With the announcement that Rebels was going to take its bow and end with its fourth season, I decided to keep my cosplay plans very localised and focus on Rebels. I cannot overstate just how important Rebels has been for me; how much it has changed my life, in ways that a space cartoon shouldn’t be able to do. So I decided to celebrate the show and my love for it for as long as possible by lining up some more Rebels costumes. First up: Numa. 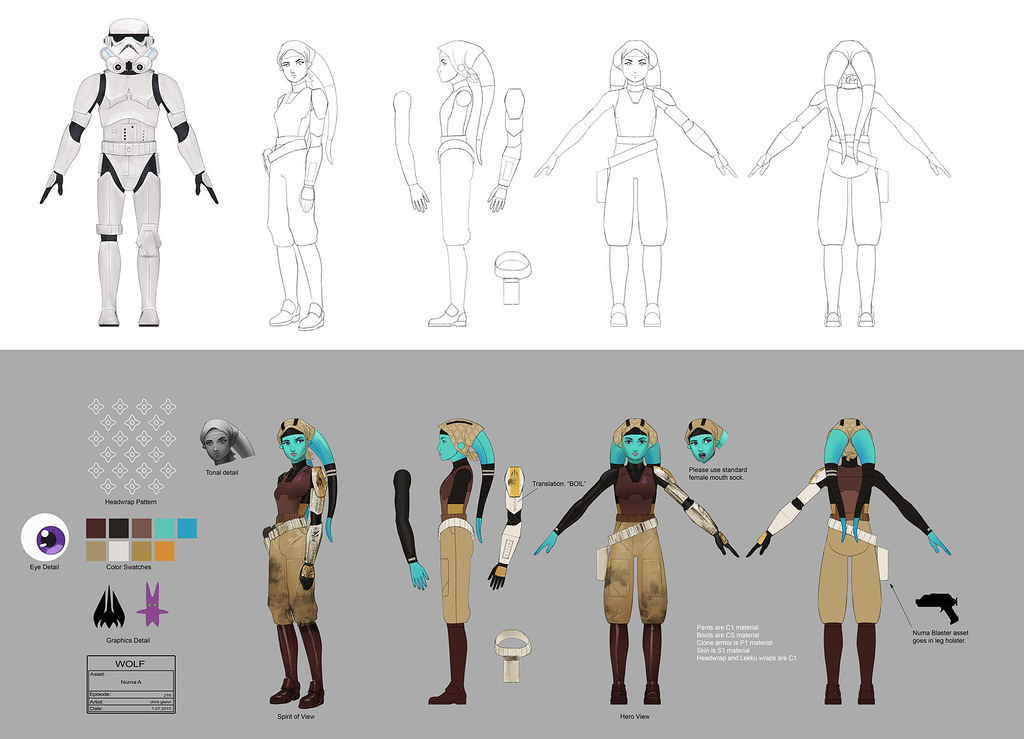 I decided to start with what I reckoned would be the easiest part: the base cap . My plan was to use some spare Hera-style lekku, and adapt my Hera flightcap. Neither of those was feasible as Numa’s lekku silhouette is radically different to Hera’s, sitting lower, straight and being overall much wider. So I made some new lekku (you can see my process here), and draped and drafted a new cap pattern – altering one owuld have ultimately been more work due to the squared out shape.

The cap was made from a texturised black lamb nappa backed onto (but not bonded with) calico. The central panel was quilted per the show turnaround: wadding sandwiched between two layer of calico with the top layer of leather. I also added interfacing at the narrowest point of the central panel for additional stability: the lekku are heavier than Hera’s, and the cap has no chinstrap so it is more dependent on fit for security.

I spent a ridiculous amount of time fussing over the lekku wrappings. I just couldn’t get my head around them. They’re obviously intended to be wrapped but as they have been designed they are perfectly even and not angled. I mucked about with just stitching which just didn’t work with this leather; pleating was too bulky. For some reason the thought of panelling the wraps didn’t occur to me for days.

Once my brain refunctioned, I stitched 10x4cm strips of the same nappa used for the cap, with strips of white vinyl for the detailing. Once a complete piece, this was stitched to form a ‘sock’ that would pull up the lekku. A dab of prosaide along the top and bottom hems ensured that they wouldnt slip.

The kerchief, like the cap, was draped on the stand. This was wear the costume really came together for me and realised just how strong the French Resistance influence is in Numa’s design, from the adoption and adaption of menswear and armour to the earthly and old-fashioned details. Draped, drafted, and made up in a linen-cotton blend that I had printed.

The fabric parts were quick as could be: a basic high necked body with neckseam detailing and matching glove in a dense black jersey; wide-legged trousers adapted from Hera’s with integrated pockets, appliquéd panels and a gathered cuff in a beige twill. Easy neatness with minimum fuss is key when making a costume, particularly when bodypaint is involved, so I always try to integrate any base layers into a body. ( I did, however, mess up one point: on Numa’s turnaround she clearly has a male flyfront on her trousers. Which I discussed at length as it as either an error on the part of a male character designer, or they are in fact male trousers. Whatever the answer: I went on autopilot and put in a female flyfront. Ho Hum.)

The armour: this was the part that scared me the most and that I put off for as long as possible. Sewing, making garments means working and thinking in 3d, and yet for some reason I just couldn’t wrap my head around creating forms out something solid. On top of that, Numa’s actual design, particularly on the armour front, varies wildly from Spirit Of, to turnaround, to actual in show model. Inconvenient. The armour is crucial to her look and – being the armour of clone trooper Boil from The Clone Wars – a key, living element of her history.  On top of that, it looked like i was going to be the first Numa in the RL which meant that, for me, it was a costume that representing a lot of in-universe connected history. I elected to compromise between the three models and captured the sense of her as closely as I could.

Several cardboard forms and much frustration later, and I settled on 3mm foamex to construct all of the armour. When it came to painting the arm piece, I used an off-white rather than a true optic white: this armour is old and came to Numa through a war (and worrying concern for just how Boil died given all of those claw marks), and are now central to Numa’s own war.

Last of all, for maximum pain, I pulled together a couple of props:

First of all, I replicated Numa’s tooka doll as seen in The Clone Wars, now frayed and falling apart 15 odd years later.

And secondly I acquired a Phase II trooper bucket from EVO3 that I painted to match Waxer’s helmet (the other half of Waxer and Boil) as seen at his death in the Umbara arc.

I learned a lot of new skills working on Numa, and I am deeply proud of some of my work in this costume. It is still in need of a few points of refinement (and is far less comfortable than Hera), but I think I managed to capture the spirit of Numa fairly effectively through this costume.