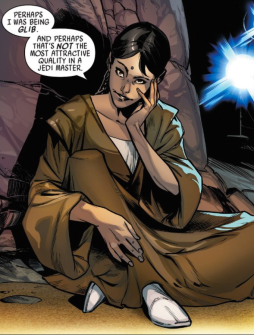 I find it really interesting that when she’s leading on the front line, Depa Billaba is so exposed. Her costume is soft, in-keeping with her TPM costume – what looks to be a long tunic or dress, possibly over trousers, soft boots which look to be some sort of tabi-boot in certain panels, and bare wrists. (The first flashback splash page shows Depa with wrappings like Caleb’s, but that… entire costume, really, appears to be out of ocntinuity with the rest of the comic.) Her shoulders, neck and chest are entirely exposed, just like tiny Caleb all the better for being killed by clones. But here on Kaller she’s a woman who has doubts – in the war and in the choices made by her Order – but not in herse lf. The way she talks to Caleb and encourages him to question and explore the galaxy and the code shows that she is comfortable; she is confident with her men, and is hsown to have a steady repartee with them (a little at Caleb’s expense, bless him.) This is a very loose, fluid and open silhouette, which mimics her attitude to the world around her and the Force.

For now, form follows function. Function may be found in form.

In First Blood, freshly woken from her coma in the temple, she’s all defense. She has that same line with her undershirt that mimics the line of her field tunic, but that’s about it. She has leather boots, and armoured vambraces. The lines are harder and harsher and cinched, as are the materials, and the silhouette is more obviously Jedi. Even more specifically, padawan as her outfit is a partner to Caleb’s (and oh, but he is wee.) She is retraining – parallel to the padawans-to-be – reproving herself as a master. Despite being in a place of safety and famili arity, she is unsure and she is vulnerable despite her armour. At any moment she can be rejected by the council, deemed unworthy (deemed guilty of her failings.)

And then there is this youngling with his questions. And somewhere in the months, years, Depa finds herself again, finds that stable centre and assuredness and the freedom that comes with it.